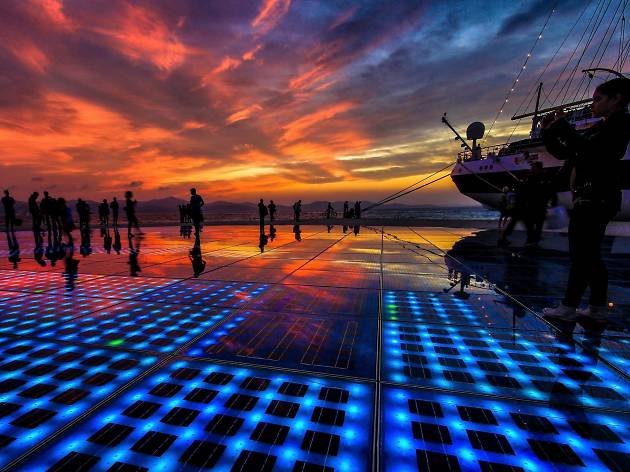 The city of Zadar is Croatia’s oldest inhabited city, its history dating as far back as the 9th Century BC. With a perfectly formed old town on a peninsula with the Adriatic wrapped around it, explore this if you’re seeking the ideal Croatian city break by the sea, complete with history, architecture, great food and wine.

Amidst so much heritage, history and jawdroppingly beautiful architecture, we loved the waterfront area of Zadar. Right by the lapping Adriatic with an unspoilt, breathtaking view across to the Croatian islands, a stroll along this stretch day or night is fabulous, but sunrise and sunset are particularly captivating. Expect crowds, especially when the weather is perfect. This spot boasts of the most beautiful sunsets you’ll ever see. 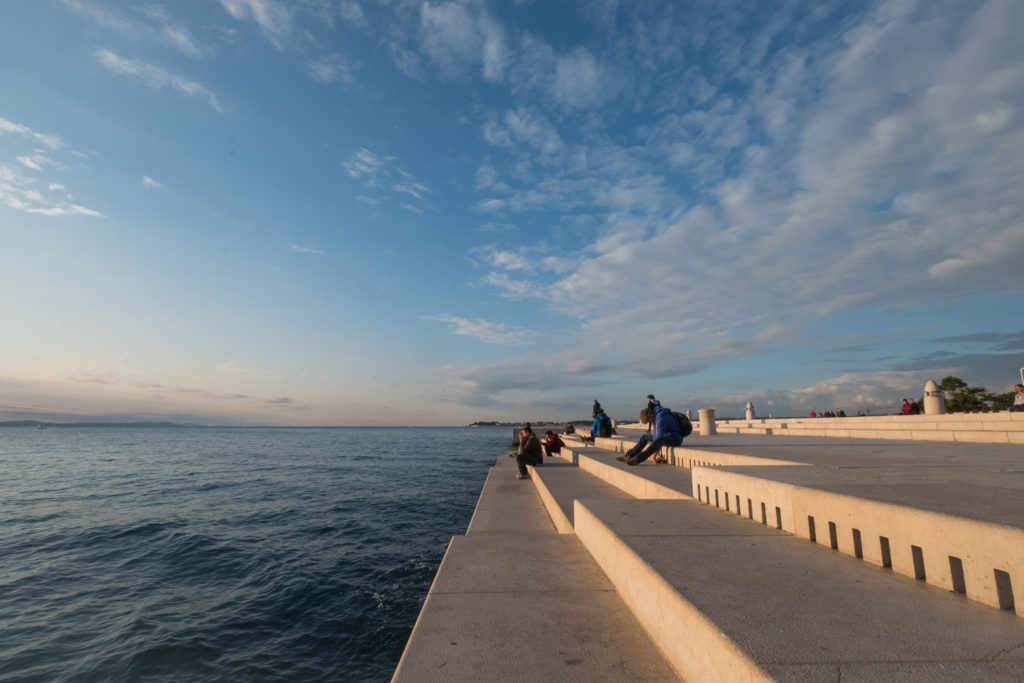 The Sea Organ is an unbelievably simple but complex and clever piece of architecture where the Adriatic’s waves make music 24 hours a day. The lapping aqua-hued waves of the Adriatic create a symphony from the force of hitting against the quay and pushing air through ‘organ’ pipes to produce sound. You’ll find yourself spending hours just sitting and relaxing here. 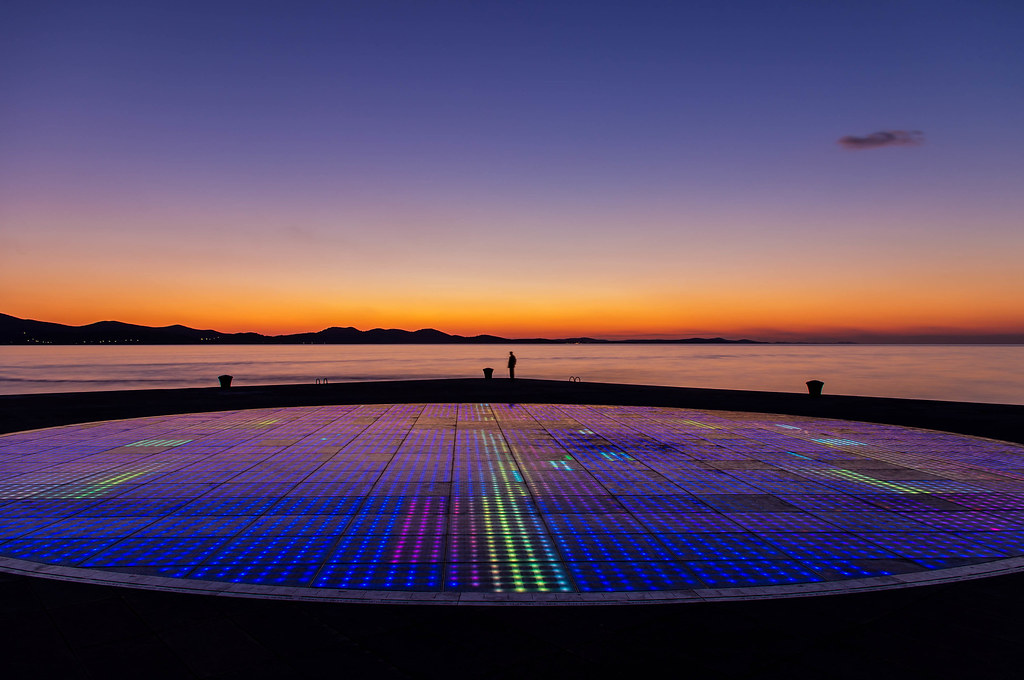 ‘Monument to the Greeting to The Sun’, 300 multi-layer solar panels conserve sunlight during the day and when the sun sets, a light show begins. Illuminating an area that’d otherwise be darkened by the night sky, it’s hugely popular with tourists. Smaller circles representing the planets link the structure to the Sea Organ. 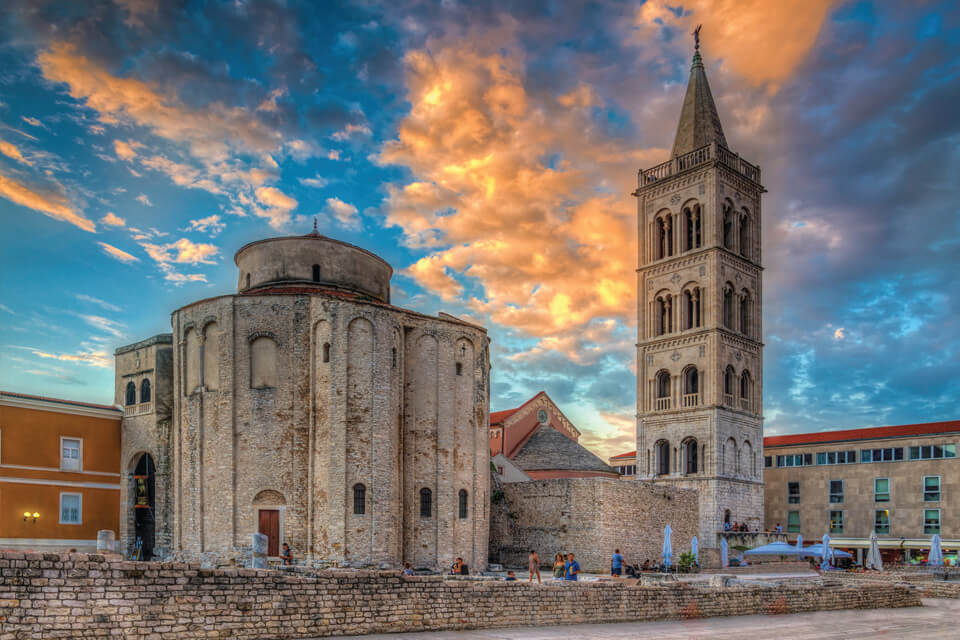 The symbol of the city of Zadar and the most famous monumental edifice in Croatia from the early Middle Ages (9th c.). Church of St.Donat is round pre-Romanesque church which was called the Church of the Holy Trinity until the 15th c., and from that time on carries the name of Saint Donat, by the bishop who had it built. In front of the church of Saint Donat and the Archbishop´s Palace there is a Forum, municipal square from the Roman erais.

The City walls were built as a defence against the Turks. Being a city on the Dalmatian coast, it has been conquered and invaded plenty of times over the decades. Despite sustaining significant damage during World War II, there’s still a huge amount of the structure remaining, but it no longer surrounds the entire town.
The Renaissance Venetian gate beside the Queen Jelena Madijevka Park and the small marina opposite on one side then joins with the older structures on the seafront. Over the other side of the peninsula, the walls are also the road into the city, with the cobbled thin streets beneath.

Zadar is one of the most historic cities in Croatia, you can see the elements of its former Roman rule in the architecture and structure of the old town – rectangular, organised streets, a walled surround, city gates and typical areas of the time of Caesar and Augustus, forums, temples and amphitheatres.

Some historic sites and deconsecrated churches are now being re-used in modern ways – for example the gift shop and gallery at the Church of St. Andrew and St. Peter the Elder’s, former St. Laurence’s Romanesque Church (11th Century) within Sveti Lovre on Narodni Trg (People’s Square) and Five Wells Square (trg Pet Bunara) which in the summer turns into a huge pop-up nightclub, hosted right beside the old city walls. 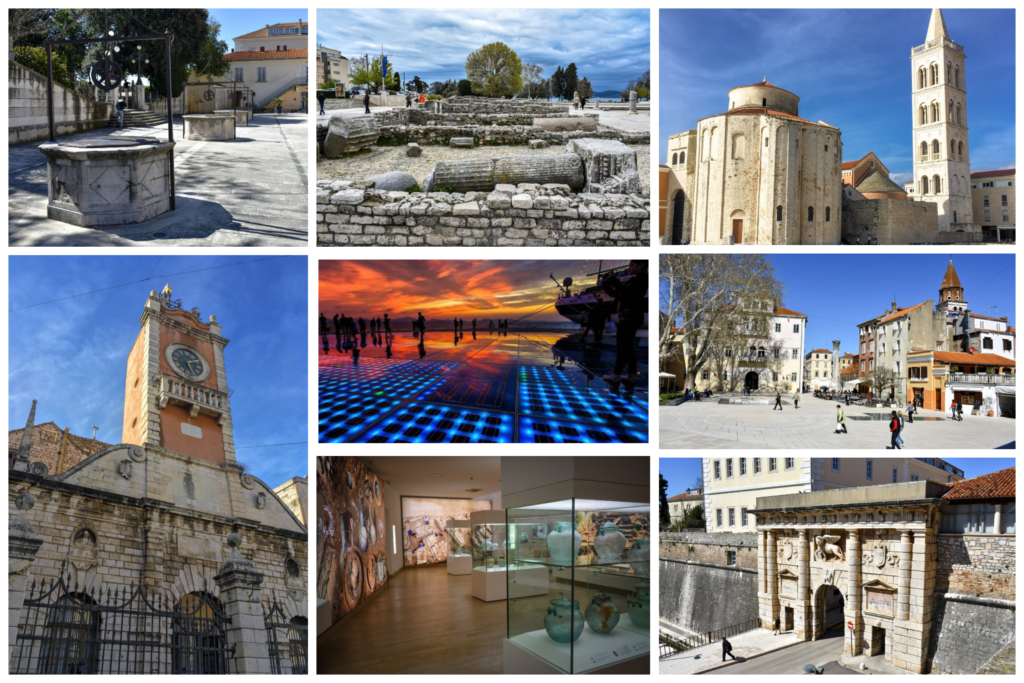 Want to mingle with the locals? The People’s Square (Narodni Trg) may not look like much but it’s really the heart and meeting point of the city. The main building on the square, City Hall, is relatively new (1935) – it’s in Italian fascist style and the fresco-style panels all around are other, reflecting the regime in place around that time. The frescos showing various landmarks from across Italy and the occupied Dalmatian coast.

The Benedictine nuns have been in situ in Zadar since the 7th century and are some of the most learned people on the history of the area. They operate a museum, fabulously titled The Gold and Silver of Zadar, within their convent which holds within some of the most incredible relics, religious artefacts and artworks in the entire world.

The Museum of Ancient Glass, set in a resplendent former palace overlooking the interior harbour, tells the story of glass through the ages – the process of which hasn’t actually changed much from when it was first discovered!
See beautiful glass artefacts through the ages found in and around Zadar and also visit the glassblower on the second floor to see a live demonstration of how to create glass objects. Absolutely fascinating and well worth a visit, not least for the gorgeous items in the gift shop at the end!

In terms of temperature, at the peak of the summer (June-August) it usually hovers between 22 and 30ºC, but in general Zadar has a mild, Mediterranean climate. It hardly ever goes down to 0ºC, but rain can be frequent, year-round.